Friday was my last day as a postdoc at NTU. My next step isn’t another postdoc or even a faculty position; instead, I’ll be learning about public policy as a AAAS Science & Technology Policy Fellow (STPF)! My placement is in the Department of Energy, where I’ll be working on the diplomatic and legal arrangements that support international scientific collaboration.

What is a AAAS STPF?

The AAAS STPF program places scientists as advisors to US federal agencies for 1-2 years (they also offer legislative and judicial fellowships). These are not research positions, they are policy positions. The idea is to provide agencies access to scientific expertise and provide fellows an on-ramp into policy work. Fellows work directly with their host offices doing anything from analyzing nuclear weapons programs to evaluating sanitation services in developing countries. Fellows receive a stipend and reimbursement for health insurance, as well as support for professional development and travel. They also join a vast network of thousands of STPF alumni across government, academia, industry and nonprofits.

This program has been a dream of mine for literally years (at least 7). I love research, but you rarely get to see any direct impact from your work. Public policy, despite its frustrations, offers feedback on a much shorter timeframe. I have met many past fellows, all of whom have gone on to have fascinating careers spanning academia, industry, consulting, and (of course) government. 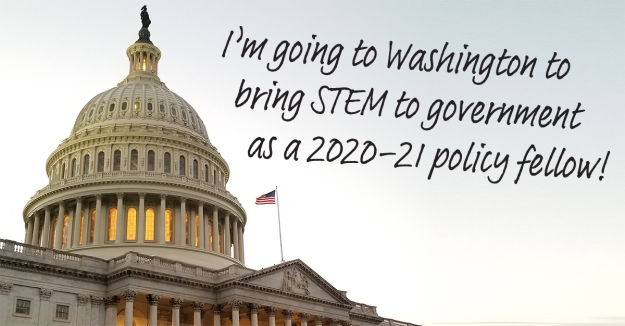 What will I be doing?

My placement is in the Department of Energy Office (DOE) of High Energy Physics (HEP) in Germantown, Maryland. The official position title is “International scientific collaboration: diplomatic and legal basis,” but what does all that actually mean?

Despite the word “physics” appearing in the title, this work will be unlike anything I’ve ever done before. I won’t be using my physics knowledge at all! Instead, I’ll be helping to form the government-to-government legal agreements that support scientific collaboration.

Basic science is an intrinsically international pursuit. Perhaps nowhere is this more true than in high-energy physics (aka particle physics), where the experiments are simply massive, so much so that no country could afford to build them on their own. The Large Hadron Collider (LHC), the largest such collaboration to date, cost over $5 billion and involved more than 100 countries and 10,000 scientists. In a big project like the LHC, millions of dollars in scientific equipment and thousands of scientists are constantly crossing international borders (in the case of the LHC, the accelerator itself literally straddles the French-Swiss border). Governments (and their science funding agencies) want to make sure their money is being spent appropriately. They also want to make sure that, for example, if they spend a ton of money to help build an experiment on the other side of the world, that their scientists will be able to get visas to go run the experiment. All this requires a foundation of government-to-government legal agreements, and I’ll be working for the office that helps negotiate those agreements.

Science has a remarkable ability to bridge even the most fraught divides. While it might not be surprising that European countries and the US can work together on building a particle accelerator, even hostile nations often maintain substantial scientific connections. For example: the SESAME accelerator in Jordan was built by a collection of Middle Eastern countries that includes both Israel and the Palestinian Authority, who (to put it mildly) don’t always get along.

I’ve been a postdoc at NTU for over two years. In that time I’ve written papers, mentored students, organized group meetings and gone to many local conferences. I’ve have the privilege of working with some wonderful people at NTU and other universities in Taiwan. On top of all that, living in Taiwan has been a great experience. I’ve learned a bit of Chinese and I even learned to drive a motorcycle.

I will definitely miss academic research, but I’m super excited about this next step. I’ve had brief science/policy experiences before, but this is my first chance to dive in and really get my hands dirty. I’m looking forward to meeting the other fellows, learning more about the policy process and making my own contributions to building international scientific collaborations.

This site uses Akismet to reduce spam. Learn how your comment data is processed.

This is my personal professional website. The opinions expressed here are my own and do not represent ORISE, AAAS or the Department of Energy. Nothing written here should be interpreted as a statement on behalf any of these organizations.