This is one of the coolest physics-related videos I’ve ever seen! Physicist Anders Kaestner took a “neutron x-ray” video of a moka pot (a metal stovetop coffee pot) in action.

Neutrons are a powerful tool for looking inside materials because they are have no charges, so they don’t interact with electric fields. Unlike other radiation neutrons pass relatively easily though materials, allowing us to look deep inside. By comparison, other particles we can use to image materials (electrons or photons) don’t penetrate much farther than the surface under most conditions. Neutrons interact with local magnetic moments (which makes them very useful for understanding magnetism) or with the nucleus of the atom.

A moka pot is a stovetop coffeemaker. The water is in the bottom, as it boils, it is forced up through a straw, though the grounds (held in a basket) and up through another tube into the upper chamber (where it can then be poured). It makes an interesting hybrid between espresso and percolated coffee—strong and quite tasty. As you can see in the image below, visible light only let’s you see the very surface of the coffee pot. Who knows what’s inside? 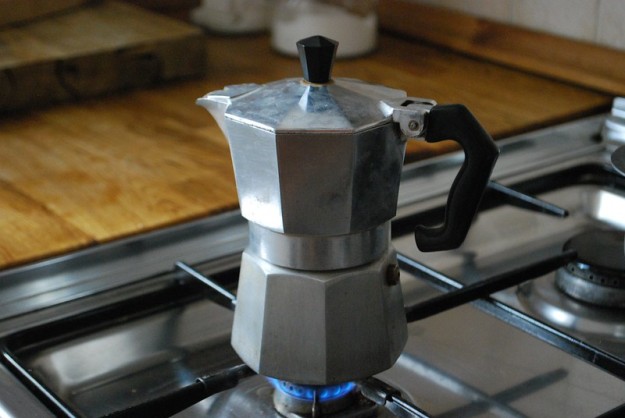 Anders fired neutrons through the moka pot into a detector and recorded images as the coffee was brewing. The neutrons pass easily through the aluminum coffeemaker, which is almost transparent. Hydrogen strongly adsorbs neutrons. Therefore the water, coffee grounds and plastic handle (all of which have a lot of hydrogen) show up as black.

When the video starts, the water is all in the bottom. Above it is the basket containing the coffee grounds. As the water starts to boil, it gets forced up through the grounds and spatters onto the lid of the upper chamber. Near the end you can also see the straw that connects the coffee basket to the bottom of the water chamber. Check it out!

You can also take a look at the writeup of this in the Guardian.

This site uses Akismet to reduce spam. Learn how your comment data is processed.